Laurie Lawson has vast experience in the field of coaching. Her work for the International Coach Federation and her media presence on podcasts and cable programs have endeared her to her fellow coaches. Currently Laurie produces and hosts The Coaching Game in which she interviews a different coach for each program. Amazingly no two guests have the same exact niche. That's because every person's backstory is different. A life-changing event brought each of them to a new career as a coach.

I've watched almost every one of The Coaching Game interviews and am always inspired by the coaches. Doretta Gadsden is an RN who is a cancer survivor and who has been living with AIDS for over two decades. She now coaches others to face fear, live positively and think out of the box. Lawyer Allison Carmen recognized that being "addicted to certainty" holds us back. She now shares her insights into "the hope and possibility" that comes from what she calls "The Gift of Maybe." Jackie Kellso left media sales to help clients build skills that enable them to "hold difficult conversations", "resolve conflict" and "lead confidently."

Recently, I decided to send Laurie Lawson a message to let her know how much I enjoy her show. I mentioned that I had connected on LinkedIn with Robert Imperato, who was one of her guests. As a coach for Millennials, I was interested in his work with teens.

To my utter surprise, Laurie wrote back and asked me to be on her show. It was an honor! Laurie was warm and gracious. I am delighted that I had the opportunity to get to spend time with Laurie Lawson and join the list of coaches that she interviewed.

Uncomplicate Your Life with a New Time Mindset 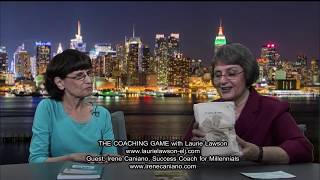 What’s in Your Life Closet?

A Few Words Can Change Your Life

Achieve Your Goals With Less Stress